20 December 2014
At the biggest Dutch dogshow, the Winnershow, on 14 December Tux won a strong Junior Class (4 dogs), earning the title JunioWinner’14. Lotus won her Class and CAC&CACIB and the title Winster’14.
Tux in action, photo by Janneke Photography. 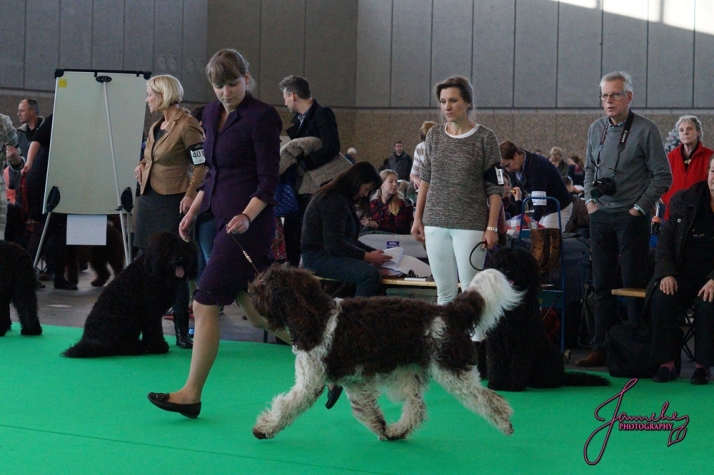 On 9 en 10 December Billy (N. Everything Zen) met his girlfriend: Ela Samba de la Serve de la Chapelle d’Alexandre, better known as Ela. Her owner Carmela Wys, kennel von Springbell, will hopefully welcome the litter from these 2 into the world in the beginning of February. We are very curious to see what this litter can bring! 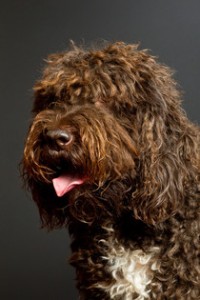 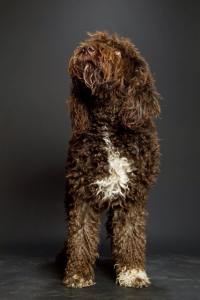 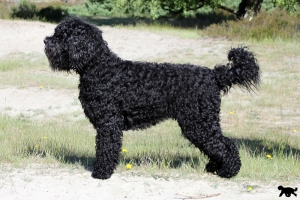 8 December 2014
First the news that Thibault’s first litter was born on November 27th, Cayenne has 4 males and 4 females that are growing well. 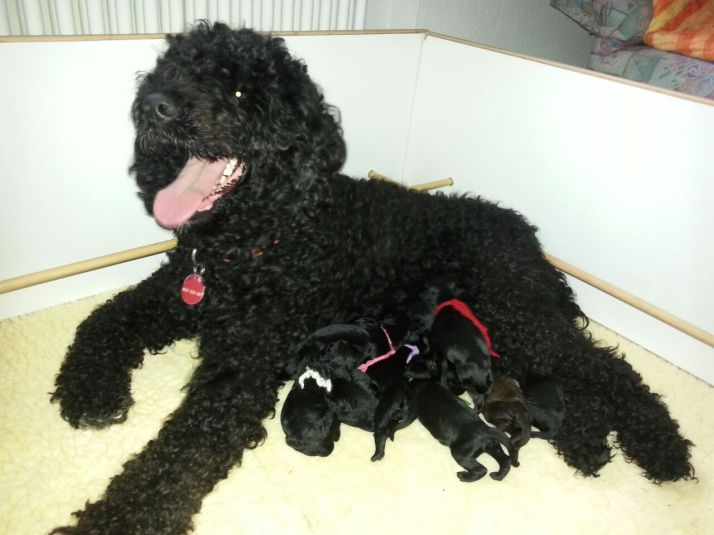 At the Internation Dogshow in Brussels (B), Lotus won CAC, CACIB and BOB along with the titles of Beneluxwinner Belgium ‘14 and Belgian Winner ‘14. This also finishes up the Benelux Champion title in a record of 3 shows, so we can now apply for this title at the FCI! Lotus is the first – and so far only – Barbet with this title.

4 November 2014
At the show in Rijswijk on Sunday 2 November Tux (N. In Full Swing) and Lotus (N. Deep In A Dream) put their best foot forward.
Lotus was the only Barbet to be awarded an Excellent by the very strict judge and became Best Of Breed.
A nice result, but the best moment of the day was the Brace Class judgement in the big ring: Tux&Lotus were chosen as Best Brace of the Day! It was so much fun,  we are proud of our brown&whites. 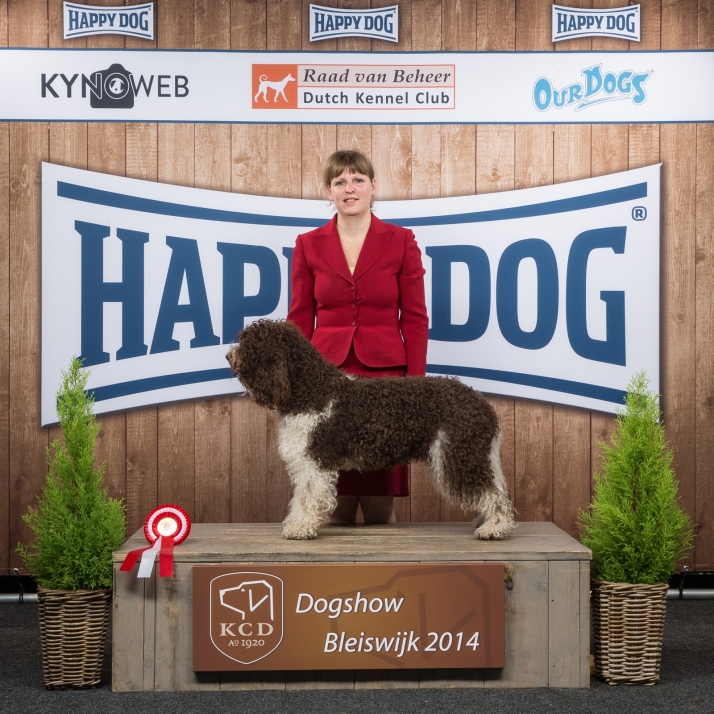 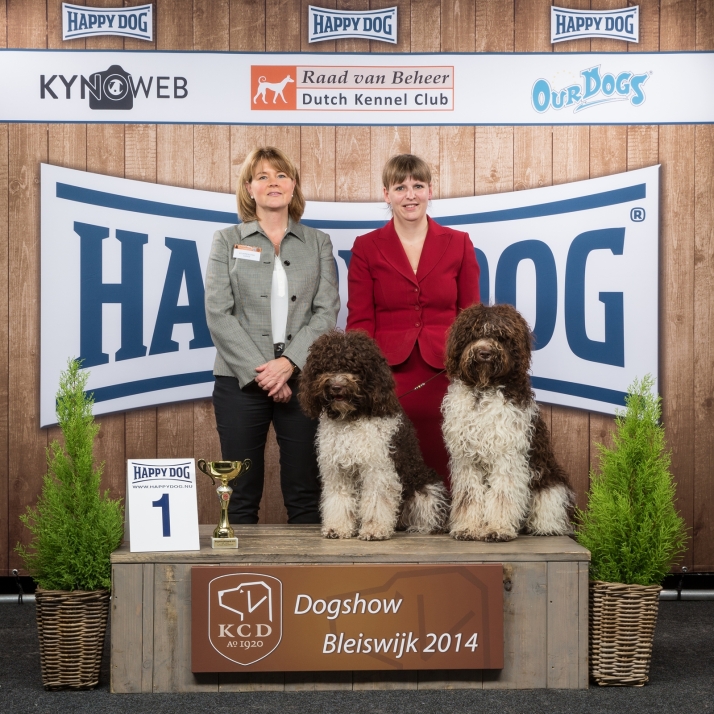 30 October 2014
More good news from the health-test front: Philou (N. Captivation) has A-hips! That is number 6 out of the A tot H-litter!

Emil (Eddie Bo da Capo), the future partner for Dolce, has undergone an eye-test and has been found free of all hereditary eye-conditions, including distichiasis.

28 October 2014
Thibault is going to be a Dad! The mating with Cayenne (Sina vom Staufener Schlossberg) has taken, as an ultrsound showed. The pups are expected around November 27th.

27 October 2014
The yearly Specialty Show hosted by the Dutch Barbetclub held on October 26th was a very nice day, but also a very succesful day for the Nuphar’s-Barbets! We are proud to say 8 Nuphar’s were entered and all of them received a nice report from judge mrs  T. van Adrichem Boogaert-Kwint.

Of the 4 winners at the end of the day, 3 were Nuphar’s.
Billy (N. Everything Zen) was Reserve Best Male.
Malou (N. Moments In The Moonlight), not even 10 months old!, Reserve Best Bitch and
Lotus (N. Deep In A Dream) can now call herself Clubwinner 2014 and BISS by winning Best Bitch and Best of Breed! 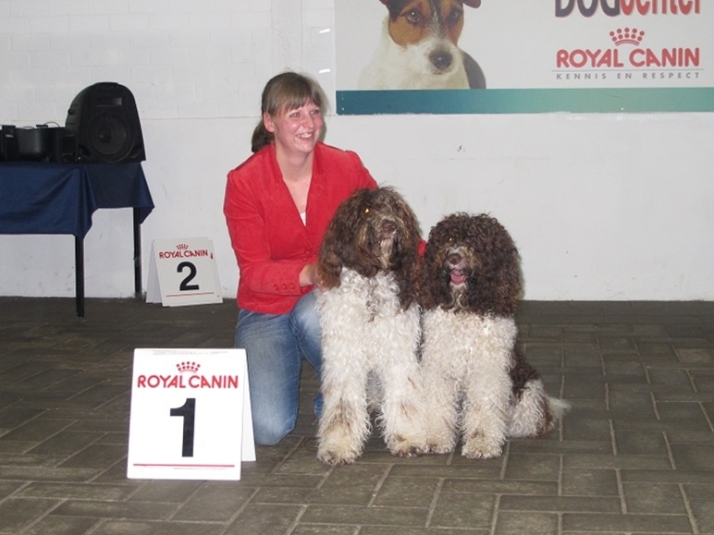 There is a detailed post about our day and the reports the dogs received on our blog. In Dutch but with help of the translate button, I hope non-Dutch speakers can make some guess as to what is written.

Although the Specialty is foremost a fun day where we come to enjoy seeing so many Barbet together, we feel it’s a really nice compliment that our dogs are so highly thought off. For us it confirms that the Alba-pups meet the breedstandard and that they measure up well compared to the other Barbets in the population.

22 October 2014
We are pleased to announce the male for our next litter: Eddie Bo da Capo will hopefully be the father to Dolces litter. For more information on both dogs, see the Puppies-page. Mating planned for January 2015, with hopefully puppies born March 2015.

2 October 2014
For once not show-news but even more exciting: Puppyplans with Nuphar’s Barbets are upcoming!
Thibault (Nuphar’s Four Leaf Clover) has had some dates with Cayenne (Sina vom Staufener Schlossberg) from the south of Germany. We hope this will lead to a lovely litter of puppies for owner/breeder Gabriele Winnewisser from kennel vom Staufener Schlossberg. If everything goes to plan, the litter is expected at the end of November. 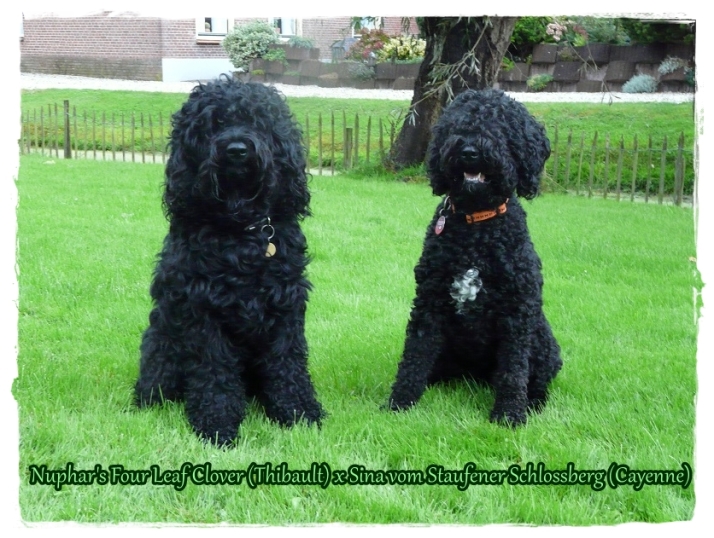 In our own kennel we plan a litter to be born around March 2015. Mother-to-be is the lovely Dolce (Nuphar’s All My Tomorrows). This litter will be a special occasion, a co-operation where we will advise and guide Miska and her family in the adventure of breeding a litter. The puppies will all carry the Nuphar’s prefix but will be born and raised in Dolces own home. On the Puppies-page we hope to announce very shortly who will be Dolce’s lucky partner.

13 September 2014
Lotus is on a roll and keeps on winning! At the international show in Mechelen she was awarded a second place in the group. 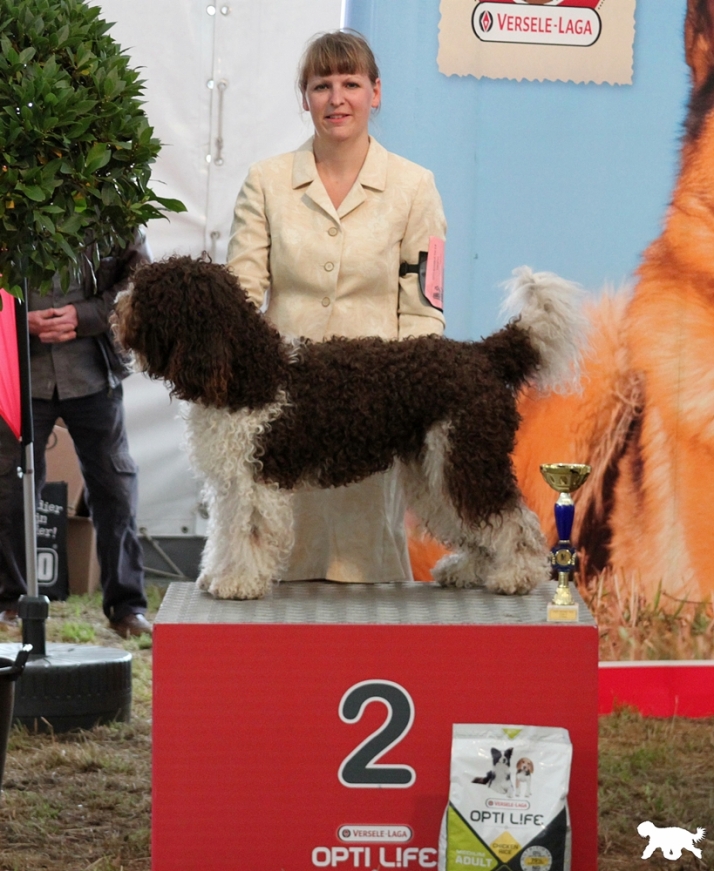 In Luxemburg she won the title Beneluxwinner LU 2014 and she made the cut in the group.

At the show in Rotterdam Lotus became Beneluxwinner NL 2014 and, with 27 months and a week, she can call herself DUTCH CHAMPION! 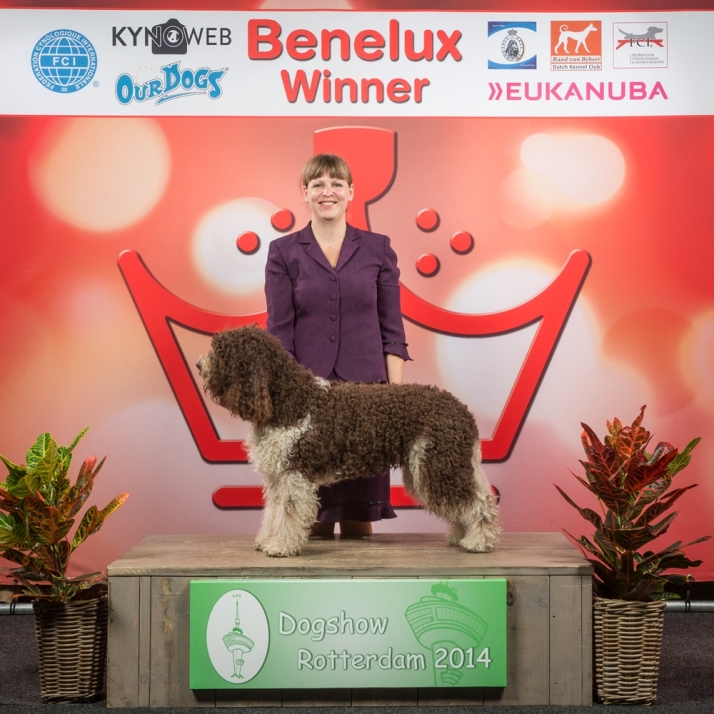 3 August 2014
Although normaly summer is a quiet time, we’ve been busy lately!

On July 4th Anne accompanied Billy (N. Everything Zen) and Thibault (N. Four Leaf Clover) and their owners to the ECVO-eye specialist for their first eye-examinations. Both have been found clear of all eye-problems. That makes them the 3rd and 4th of the litter to get a clean bill of (eye)health.
For both of them, combined with their hip-score, this concludes the health-testing needed for the breedclub to comply to the breeding regulations. This means both boys will be limited available at stud in the future. Under the Puppies-page there is a new button added where you can find the Nuphar’s males at stud.

More good news on the health-front, Nessa (N. Gift-Wrapped) had her hips x-rayed and they were scored OFA Good, which translates to FCI A. That makes her the 5th A-H ‘pup’ to be hip-scored and the 5th with an A. We are happy breeders!

In the showring Lotus has managed to add another ripple to her circle of winnings. At the show in Maubeuge (France) she won Best In Show for the second time! We’re very proud of our unique girl. 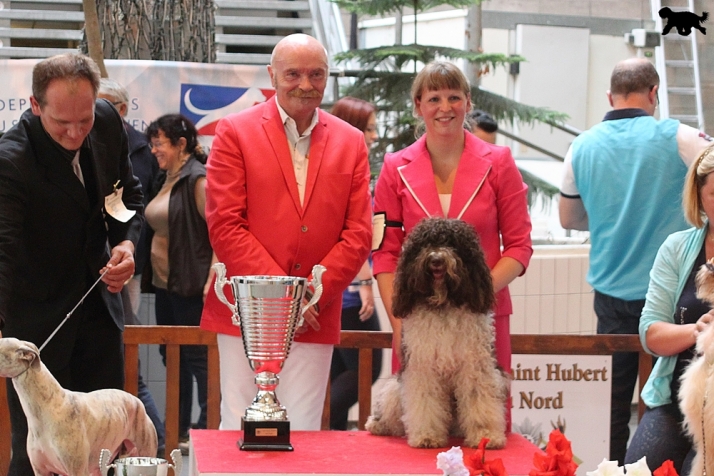 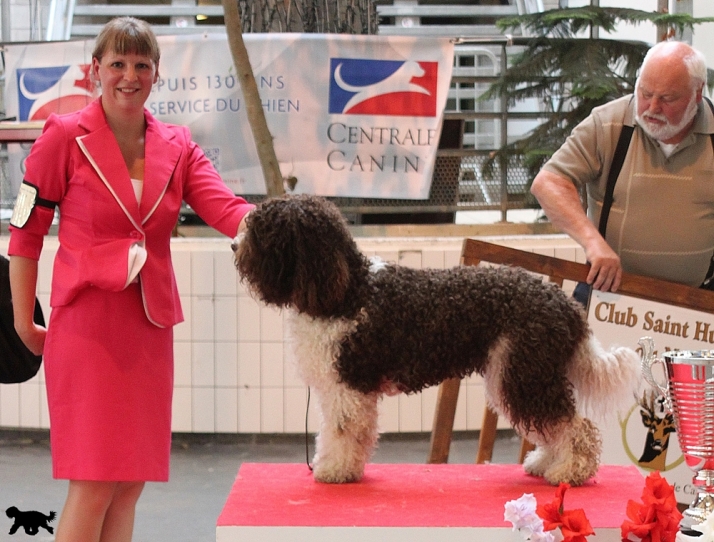 20 May 2014
The last period we’ve been very busy with Breea, but also with some shows for Lotus. After quite a break in her showschedule it was time for some shows. Lotus apparently thought it was high time to be out in the ring again as she showed her socks off, bringing home 6 back-to-back BOB-wins with CAC and CACIB.

That would have been great results in itself, but Lotus took it up a notch at the show in Amiens, France, on April 27th. She won BOB out of 5 entries, including a male and a chapion female, under a French breed specialist. After that she went BIG under another French breedspecialist, and to top it off the BIS-judge (the same who judged the breed) appreciated her so well that she got to climb the highest step again for  BEST IN SHOW.On our BLOG is the story in full. 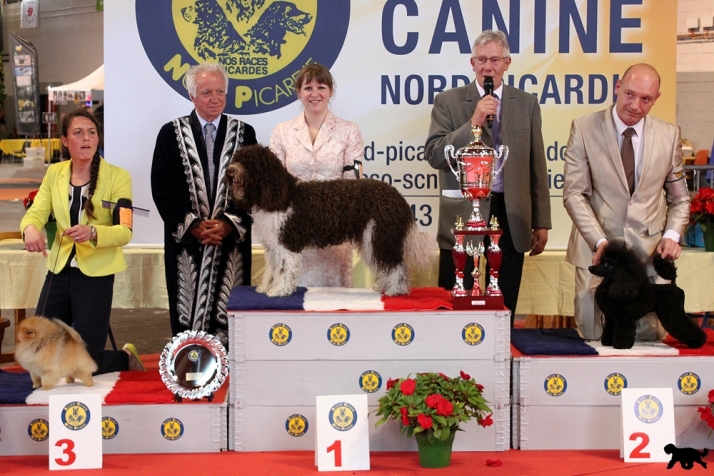 This win is special for several reasons. It’s a unique win for the breed at a big show with more then 2550 entries which isn’t something we see at every FCI show. That it’s in France, under French breed specialist judges, makes it even sweeter. A young bitch, shown in Intermediate, isn’t a likely BIS-candidate either. And for us, it’s our first homebred girl from our first litter.

We are so proud of Lotus!

19 March 2014
At this moment Breea (Nuphar’s Necessity) is the last I to O-puppy left at our home, all the others have moved to their new owners. They have all settled in well and are bringing their owners a lot of joy.  Breea will move to Wales, where she will join her father Claude, but to enter the UK she needs to be vaccinated against Rabies. That’s why we get to enjoy her a bit longer!

It was about time to give every puppy his/her own page, under the ‘Puppies’ button you will find a new button for the I tot O-litter from where you can navigate to each puppie’s own page.

This litter was a lovely experience once again which taught us a lot but above all gave us a lot of joy. We are pleased that, from a less joyfull situation, we managed to keep one of the puppies ‘in the family fold’: handsome Tux (Nuphar’s In Full Swing) has moved in with his big brother broer Thibault (Nuphar’s Four Leaf Clover). We will be able to show him un the future; I’m already looking forward to this! 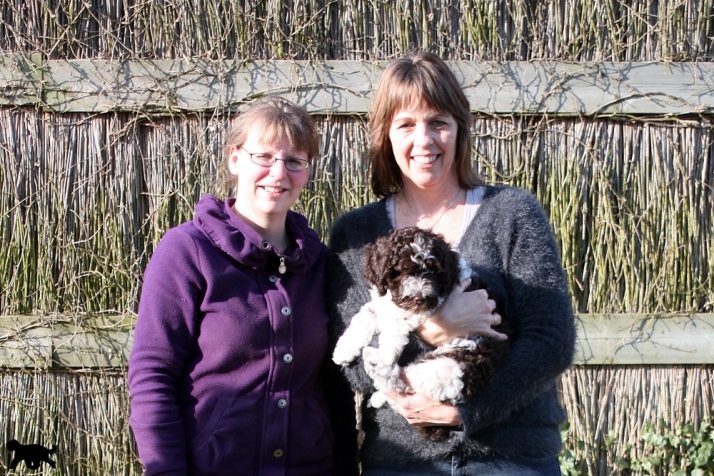 4 January 2014
On December 27 Alba has given birth to 7 lovely puppies. The whelping went smooth and without complications. We have 2 males and 5 females. The puppies are more then a week old already today. How time flies! Mother and pups are doing great.

Click HERE to follow the I to O pups on the blog and HERE for the photoalbum.
All pups are spoken for!