Every breeder makes his or her own choices. Most breeders look at the same things when selecting which animals to breed, but how they weigh these things is different for everyone.

Our definition of breeding is “making a compromise on the combination of two dogs in which you think the risk of negative things is as small as possible and the chance on positive things as big as possible”.

What do breeders look at?
* Health
* Character
* Conformation

These three pillars should be the base of every breeder’s program. A breeder who leaves any of these three out of his or her program, will sooner or later have problems. For us, all three of these aspects are equally important.

We are members of the Dutch Barbet Club and breed according to their Code of Ethics. The obligatory clinical health tests are a hip-examination for HD and the ECVO-eye examination.
We have long been a great advocate of repeating the ECVO tests for dogs who have contributed to the population. Too often we see dogs that have been bred from at a young age who only had valid eyetests for those breedings.
Eye diseases are often late-onset, which makes it important to keep testing.

In addition, every Dutch breeding dog needs a MyDogDNA or Embark-profile.
These genome-wide DNA tests also contain tests for prcd-PRA (an eye condition of which we have been aware is valid for our breed since 2018), Von Willebrand Type 1 (a blood-disease which is not proven but likely to have an effect) and the D-locus (this locus could allow a diluted coatcolor to be expressed, which is linked to a dermatologic disease).

Aside from these tests, a breeder should also consider his breeding stock for other issues.
Things like allergies, bad immune system etc. are very important things to consider.

Only dogs who are mentally stable should be bred from. Socialisation and raising/training can not erase the character traits inherited from the ancestors. We know the Barbet as a stable, social and open dog which doesn’t scare easily and will bounce back quick if something has scared him.

A breeder who says he or she does not breed for breed specific conformation, is not a good breeder of purebred dogs. The breedstandard is made to represent the ideal dog for the breed. Every animal bred from should conform to it as much as it can. That does not mean only champions should be bred from, but a breedprospect should conform to the standard up to a point at least.
The breedstandard describes the ideal functional conformation of a Barbet. Functional conformation, especialy for a breed historicaly a huntingdog, is an important for the health and wellbeing. A well constructed dog has a lower risk for injuries and less chance on aging before it’s time, especialy concerning the joints.

Aside from the amount of conformation to the standard, a breeder should also know what the positives and negatives are in his dogs build so you can try to improve. We feel that one or two shows are not enough to give enough information to a breeder about his dog’s conformation, especially if he or she hasn’t got a large amount of experience in assesing a dogs’ qualities in an objective way.
For our breed, very few Specialist Judges are available and only too often are we at the Allrounders’ mercy.

But when it comes to looking for an ideal partner for a dog, there’s much more than those three things. We feel everyone with a wish to breed from their dog, should first make sure they are educated about several things including genetics. By that I do not mean the basic lesson about Mendel’s Laws, but about what it means to breed and how much responsibility you take onto you shoulders.
They say ‘breeding is gambling’ but there are ways to make the risk as little as possible and one of them is to educate yourself as much as possible and to keep learning.

For a start, it is very important to know about the importance of genetic diversity in a breed.
In this article several aspects about this are explained in a simple and good way. It also shows why a breed is doomed if breeders won’t pay attention to breeding for diversity.
A rising inbreeding coefficient will have very negative effects on a breed in the long term and will cause loss of vitality, natural instincts and fertility but most important: lowering of the immune system.

The usual slogan ‘we breed to improve the breed’ is not something you will hear us say. We don’t see how someone could improve a whole breed unless they have a lot of breeding stock and breed often. Our goal is to preserve the positive traits from the parents we use for breeding and thus try to contribute to the breed.
In the end, we will go ahead with the combination we feel is the best possible and what we think will give us enough base to continue our goals.
We will also choose to go forward with a combination that we are most convinced will provide us with the best next generation.

When looking for a male we initially search for a dog that appeals to us in type and has not been used yet for dogs with a similar pedigree. We feel it’s important that a combination can actually bring something new to the population. We don’t see the use of repeat breedings or combining dogs of bloodlines that already have been combined before, unless for a valid reason.

Another thing we keep in mind, what all breeders should, is that we have to think ahead.
There is more than just the generation you are planning on paper. You could make the ideal combination but still end up with a dog for whom you can’t find a good partner. Íf any of the offspring will be used for breeding, is not what matters at this point. If any of the owners of the offspring should want to breed from them, there should be possibilities.
So, if we find a compatible partner for our dog, we also check if there are options for the offspring available in the population.

One of the factors to consider when looking for the best combination is the amount of inbreeding.

The Coefficient of Inbreeding (COI) was until recently something breeders could only (have) calculat(ed) based on pedigrees.
COI is the statistical calculation that shows the chance that the two alleles (pieces of DNA) a locus (a spot on the DNA) are the same (homozygous), where it’s assumed they are inherited from a joint ancestor.

Of course, science doesn’t stand still.
Embark calculates the genetical inbreeding: the actual percentage of the loci that is homozygous.
Up to now all our Embark-tested dogs have a lower genetic COI then the statistical COI predicted.

For each dog we breed from, and even each litter with the same dam, we can have a different goal for what we feel is the maximum statistical COI. Aside from that, we also look at the estimated genetical COI if possible.

What is also important to us, is which ancestors in the pedigree are responsible for the COI. A lower COI but breeding back to individuals or bloodlines we’d rather not go back to is less attractive to us then a higher estimated COI coming from dogs or bloodlines we know well and like.
Inbreeding isn’t heriditary, so a well-considered combination with a higher COI in this generation could provide us with a lot more interesting options in the next generation while also breeding for genetic diversity.

To compare pedigrees and possible combinations, we use the Pawpeds Database. This database listst the data as they are officialy on the pedigree papers. It’s regretable that in the (recent) past of the breed, there have been inconsitencies and breeders have given incorrect information for official pedigrees. We try to keep this in mind, but because it’s impossible to discover what is the complete truth about the past, we go on what is known.

To estimate genetic COI we are depending on whether or not both parents have an Embark-profile. This isn’t a common breeding practice in every country but we try our hardest to also guide and support any owner who is open to the suggestion. 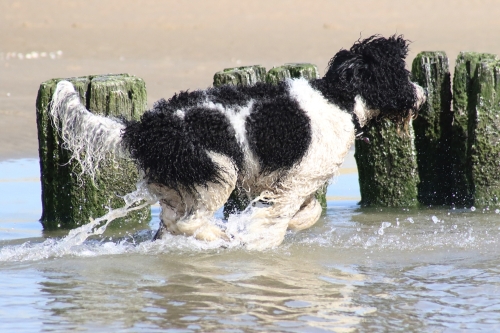 Results from healthtests from the possible breedingpartner, and his familymembers, are also an obvious factor.

The trend we see with new breeders it that they only want to breed from ‘clear’ dogs (dogs who are clear on DNA tests and have the highest scores on clinical tests). They seem to forget breeding is more then having a few health tests and a DNA swab done. Possible colors and the location of the owner of a male seem to be a priority, as well.
There is only a very small part of the DNA we can test and the phenotypical tests are also limited.

Breeding is so much more then that.

We use every ‘modern’ method science can provide but we don’t forget all the old fashioned lessons we learned from childhood on.

Overselection is one of the biggest risk in dogbreeding. It lowers the genetic variety in a genepool (of a currenlty closed population) much faster then a linebreeding now and then can do!

We are very opposed to excluding dogs from breeding based on them being a carrier for a disease for which there is a validated DNA test available or an imperfect bite, etc.
Of course we will never combine dogs that are carriers for the same disease. A deep understanding of the pedigrees is very valuable when it comes to non-testable issues.
If a dog is what we are looking for in every other aspect, he could still be the ideal partner for our girl.

With 15 years ‘in the breed’ and on our third homebred generation, we usualy have some options for our future breeding-prospects before they are even born. That doesn’t mean we don’t look at the bigger picture.
It starts with evaluating the female once she has matured, deciding what qualities we want in her partner. We then look at all available dogs, seeing what combinations could be interesting.

Even if we end up choosing a combination that was on our original list, this is where the homework starts!
We want to know as much as possible about him but also about all his family members. A dog is more than it’s health tests, especially when it comes to polygenetic diseases which are also hugely influenced by the environment. A dog is more than his show results or build, just like having a nice temperament is only part of what we need. His family members are of equal importance. How is their health, how do they behave and are they also of a type we like?

Internet is a great help in finding information, but talking to people who know the dog is just as important.
For us, being on speaking terms with other breeder, national and international, is important.

We consider ourselves lucky that there are several breeders we are proud to call friends, in the breed and in other breeds. A good friendship is based on trust and respect, not on whether or not you agree on everything.
Luckily, we think alike about many topics which not only creates the possibility of cooperating in breeding but also makes them good ‘sparring partners’ and valuable sources of knowledge.
It’s not uncommon that a good talk with my friends makes me evaluate my own opinions and sometimes even reconsider.
Because: ‘if you never adjust your opinion, it only shows you never learn anything!’